Review: '3 from Hell' is a Zombie celebration 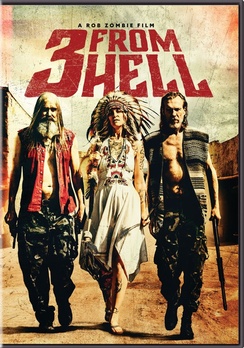 There are two camps of people in the world: those that love Rob Zombie films and those that do not. Fair warning, I am firmly planted in the first group. So, when the opportunity to review his latest Firefly family adventure 3 from Hell come to fruition, I jumped at it.

This time around, Baby, Otis, and Captain Spaulding find themselves behind bars after barely surviving their shootout with police at the end of The Devil's Rejects, but their stay in the clink is short-lived. Now on the run from the authorities, the gang heads down to Mexico where they unleash their special brand of terror to an unsuspecting small village.

First and foremost, no review of 3 from Hell would be complete without praise for the recently departed Sid Haig. He was a character actor that Rob Zombie elevated to be a maniacal clown star and I think it's safe to say that Captain Spaulding was his preeminent role.

Sid brought a certain level of panache to the thankless character that quickly became a fan favorite for his ruthless madness that seemed to seep from the celluloid. There's a particular scene in The Devil's Rejects where he is carjacking a mother and her child and while it's not overtly violent in a bloody way, it is downright diabolic and makes the viewer very uncomfortable with his creepy clown.

Sid was a one-of-a-kind gem and his presence in these films will be missed. Rest in peace Sid!

Now then, let's dig into the film properly and dissect it for all of its gory goodness. If House of 1000 Corpses was an homage to horror films of the 1970s such as The Texas Chainsaw Massacre, then it would be fair to make comparisons to some of Robert Rodriguez' early work.

In fact, 3 from Hell would probably be best described as the Firefly gang stumbling onto the set of Robert Rodriguez and unleashing hell. Set in Mexico during a Day of the Dead celebration, there's just enough imagery to invoke a different culture that in many ways embraces the inevitability of death. Yet, even here, the gang is unable to blend in as their past transgressions catch up to them in a very specific way.

In some ways, 3 from Hell evokes a certain western film nostalgia with its themes of revenge and vigilante justice making it the most complete and inspired film in the Firefly trilogy. And yet, there is also a bit of Natural Born Killers thrown in with the whole fan worship and vigilantes on the run mystique. In many ways, there's natural parallelism between Baby and Mallory that shines through as Baby increasingly loses her grip on reality as events move along in the movie.

As you are aware by now I am quite the horror film aficionado and I truly enjoy it when a series of films evolve over time. It is lazy in my opinion to simply regurgitate the last movie and add a number at the end. If I wanted to see that first film again, I would simply pop it into my Blu-ray player. No, each of three films in the Firefly trilogy are unique looks at the depth of horror in man. They each provide an impetus for a discussion into what is horror and what the future of horror looks like.

To that end, I wouldn't be surprised if 3 from Hell is Rob Zombie's last film in this story, but then again, it certainly leaves itself open for more volumes. If there's a new tale to be spun by these characters, I will be there to watch it, but I'm also content with everything they have given us up to this point.

3 from Hell is now available on glorious 4K UHD, Blu-ray and DVD.