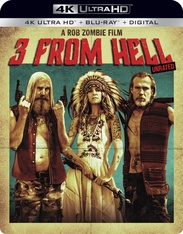 First there was HOUSE OF 1000 CORPSES. Then there was THE DEVIL'S REJECTS. Now, from writer-director Rob Zombie, comes the next blood-soaked chapter in the most violent crime saga in movie history â 3 FROM HELL. After barely surviving a furious shootout with the police, Baby Firefly (Sheri Moon Zombie), Otis Driftwood (Bill Moseley), and Captain Spaulding (Sid Haig) are behind bars. But pure evil cannot be contained, and a firestorm of murder, madness, and mayhem will be released in this terror ride to Hellâ¦and back.