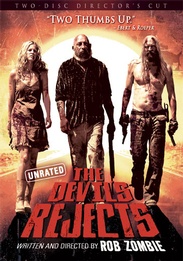 The unthinkable horror and chaos continues a few weeks after the events depicted in "House of 1000 Corpses," as the murderous Firefly family is forced on the lam after a bloody showdown at their home.

With their story all over the news, the Firefly family continues their soulless killing spree, while Sheriff John Wydell - hell-bent on avenging his brother's murder - looks to track them down for one last horrifying confrontation.