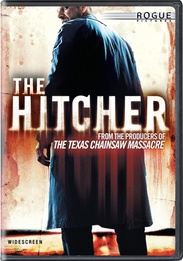 Dave Meyers makes his feature directorial debut on the new thriller, which tracks the terrifying trajectory of Grace Andrews (Sophia Bush) and Jim Halsey (Zachary Knighton), a collegiate couple who are tormented by the mysterious hitchhiker John Ryder, a.k.a. The Hitcher (Sean Bean).

The young couple hit the road in a 1970 Oldsmobile 442, en route to spring break. But their pleasure trip soon turns into a waking nightmare. The initial encounters with Ryder are increasingly off-putting for Grace and Jim, and they bravely fight back when he ambushes them. But they are truly blindsided when he implicates them in a horrific slaying and continues to shadow them.

The open road becomes a suspenseful, action-packed battleground of blood and metal as, in trying to elude not only Ryder but also New Mexico State Police Lieutenant Esteridge