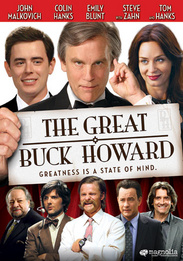 Once upon a time, Buck Howard (John Malkovich) spent his days in the limelight as a mentalist extraordinaire! Nowadays, its clear to everyone except Buck that his act has lost its luster. Convinced his comeback is imminent, Buck needs a new road manager and personal assistant. Recent law school drop-out and would-be writer Troy Gable (Colin Hanks) needs a job and a purpose. Working for the pompous, has-been mentalist fills the former requirement, but how it satisfies the latter is questionable. Nonetheless, with the aid of a fiery publicist (Emily Blunt) and a bold stroke of luck, Buck lands back in the American consciousness, taking Troy along for the ride.Â

Rated PG for some language including suggestive remarks, and a drug reference.