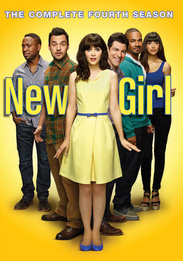 In the hilarious fourth season of New Girl, love is funny and elusive as the newly single Jess tries to avoid, then hang onto, a sexy British teacher with an adorable accent. Schmidt gets schmid-tten with an ambitious councilwoman, while Nick wants to find a woman whoâs just like him. The gang takes on tasks proven to be pretty difficult: the new cop on the block, Winston, tries to prove heâs a badass and Coach searches for a woman he hasnât already dated. Plus, Jessâs middle name, and the goofy reason for it, are revealed! The whole lovable ensemble walks the line between acting mature and slightly nuts. And speaking of nuts, will Cece ever admit her feelings for Schmidt?