Review: 'Bloodshot' is a unique twist on the comic book genre 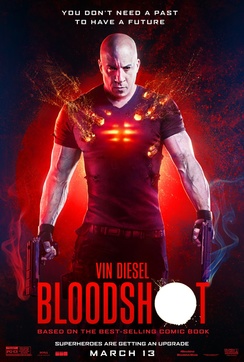 No, many comic book movies are forgettable affairs bordering on the unmentionable abomination that is Green Lantern. The true secret ingredient in the Marvel Universe is their ability to make relatable films that connect both with true believers and those just looking for a popcorn escape from everyday pressures.

And yet, while as successful as the Marvel movies have been, I always felt there was room for more. Enter: Bloodshot.

Vin Diesel stars as Ray Garrison, a recently deceased soldier who is brought back to life by a shadowy corporation. Ray wasn't just brought back from the dead, he was augmented by nanotechnology to create a virtually indestructible super-soldier.

Vin Diesel has the physique that screams comic book hero, but he's been pretty preoccupied with The Fast and The Furious franchise. Don't get me wrong, he's had a pretty lucrative run with this series, but I wasn't shocked when I heard that he was going to get his own comic book movie and the potential for multiple sequels.

And then, the Corona Virus pandemic happened and theaters shuttered with Bloodshot stuck at third at the box office with only a measly $10 million in box office earnings. Of course, even after you take away the pandemic, the writing was on the wall that Bloodshot wasn't going to be the next massive comic book hit.

I had pretty low expectations going into my review and I must admit that I'm not the biggest Vin Diesel fan, but I was pleasantly surprised. Not only is Bloodshot a fun comic book movie, but it's got a few twists in it that you just see coming. You typically go into a comic book movie with a least common denominator approach where you expect everything to be fairly simple, but this isn't the case with Bloodshot.

No, there's a fairly big twist at the end of the first act and what you figured was just another action-packed comic book movie suddenly took on more gravitas. For the first time in a long time, I was actually intrigued as to where the story was headed.

Of course, not everything works, but the filmmakers swung for the fences and they pretty much delivered on what they wanted to accomplish. Vin Diesel is convincing as the super-soldier and there is plenty of world-building to imply that Sony Pictures was hoping to turn Bloodshot into a new successful franchise for Vin Diesel.

The supporting cast is top-notch and two performances stood out over the others. First, Guy Pearce, who is always great, turns in another wonderful turn as Dr. Emil Harting. He's the perfect setup and potential foil for Ray and generally elevates the action around him.

The second standout performance came from none other than Lamorne Morris. He's best known for his work on the TV series New Girl, but his comic relief is perfect and he really showcases his superior comic chops. I'd love to see Lamorne in more of these types of roles and hopefully, he'll get the chance based on the strength of Bloodshot.

Overall, Bloodshot is the type of film that we should be enjoying in megaplexes right now, but thanks to this pandemic we can't. Hopefully, they will reopen theaters soon and we can get back to the distracting power of Summer blockbusters. In the meantime, we can enjoy this sneaky good comic book movie that aspires, and achieves, more than it rightly should.

Bloodshot is now available on 4K UHD, Blu-ray and DVD.