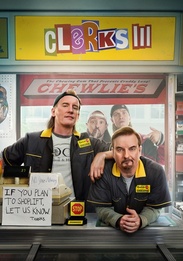 Clock back into the CLERKS universe for writer-director Kevin Smithâs third entry of his iconic comedy series. Once again behind the counter of Quick Stop, Dante (Brian OâHalloran) and Randal (Jeff Anderson) are still hanging out with Jay and Silent Bob (Jason Mewes, Kevin Smith), handling quirky customers, and sneaking off for rooftop hockey. But after Randal has a heart attack, heâs determined to make something of his slacker life â by shooting a movie about it! Featuring Rosario Dawson, a host of celebrity cameos, and Smithâs signature humor, CLERKS III is a hilarious and nostalgic capstone to the CLERKS legacy â nearly thirty years in the making.