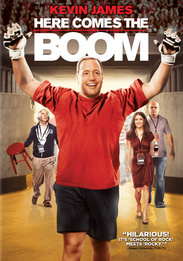 In the comedy Here Comes the Boom, former collegiate wrester Scott Voss (Kevin James) is a 42-year-old apathetic biology teacher in a failing high school. When cutbacks threaten to cancel the music program and lay off its teacher (Henry Winkler,) Scott begins to raise money by moonlighting as a mixed martial arts fighter. Everyone thinks Scott is crazy â most of all the school nurse, Bella (Salma Hayek) â but in his quest, Scott gains something he never expected as he becomes a sensation that rallies the entire school.

Rated PG for bouts of MMA sports violence, some rude humor and language.