Worst Trailer Ever: 'Boom' fails to pack a punch 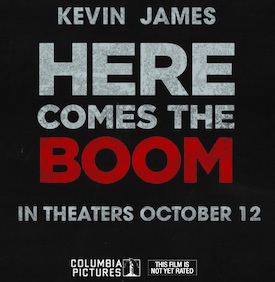 You know just last last week, we were lamenting about Adam Sandler's spiraling career and how it was circling the drain. Today, we get some pretty convincing evidence that he and his buddies (in this case Kevin James) at Happy Madison Productions are basically trying to see how much of Sony's money they can waste.

The convincing evidence in question is the not one but two trailers that were released today for Here Comes the Boom. As you may recall from last year, Here Comes the Boom made my Bummer Preview of the top films that no one wants to see.

In that piece, I pledged to "go out of my way to avoid watching even the trailers for his [Kevin James] movies" and yet like a moth to the flame of a bug zapper, my eyes were pulled in, to both trailers. To say that they are bad would be affront to bad movies everywhere.

At some point we will need to create a new classification of movies and at the bottom of the scale, below even Plan 9 from Outer Space would be all movies starring, written by, directed by or even rumored to have the involvement of Kevin James.

The job of a trailer is to sell the movie. Ideally, you want to make the movie being sold as desirable to as many people as possible. Simple math: more butts in seats equals more dollars in the studio's bank account.

Sadly, I can't tell if this is supposed to be a comedy or an inspirational film. There wasn't a single laugh in either trailer and it's clear that all of the principles actors are simply going through the motions.

If School of Rock hooked up with Nacho Libre and had a kid, it would probably be Here Comes the Boom. Sadly, the kid was raised in foster families so it's a mean bully that no one likes.

And that is what I got from these trailers. I think that qualifies them to be in the running for the "Worst Trailer Ever."