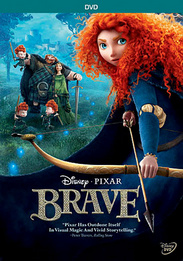 A rugged and mythic Scotland is the setting for Pixar's action-adventure "The Bear and the Bow." The impetuous, tangle-haired Merida, though a daughter of royalty, would prefer to make her mark as a great archer. A clash of wills with her mother compels Merida to make a reckless choice, which unleashes unintended peril on her father's kingdom and her mother's life. Merida struggles with the unpredictable forces of nature, magic and a dark, ancient curse to set things right.

Rated PG for some scary action and rude humor.