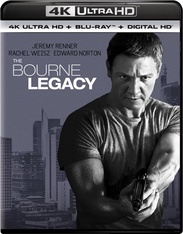 The Bourne Legacy pulls back the curtain on a government secret even darker than Jason Bourne. When Bourne exposes Operation Treadstone at the end of The Bourne Ultimatum,he sparks a bonfire that threatens to burn down decades of research and development into the building of better spies and warriors. In The Bourne Legacy, audiences discover that there are actually a variety of covert intelligence programs  all of which now feel the threat of exposure. On the verge of having their conspiracy revealed, members of the governments intelligence community will stop at nothing to erase all evidence of their top secret programs. With his life in jeopardy, agent Aaron Cross (Jeremy Renner) must use his genetically-engineered skills to survive the ultimate game of cat-and-mouse and finish what Jason Bourne started.