Monday Morning Mixer: 'Bourne' is alive after all 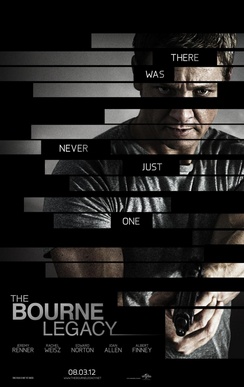 Phew. The Olympics are over.

I know that some of you might be feeling a bit of Olympics hangover today, but I, for one, am a bit happy that they are done. Committing to doing a Film Olympics piece for each day, and then actually following through with it, was a much bigger task than I had planned.

But, I had plenty of fun doing it and all indications are that you all enjoyed it as well. So, I'm sure that I'll be crazy enough to do it again when Rio rolls around in 2016.

Enough of the Olympics, this story is all about what happened this past weekend in the world of film. It was a pretty active one, which is odd for the doldrums of August, but it hints that the rest of the year could be as good as we hoped it might.

Pour yourself a good cup of coffee and settle in for this week's MMM.

The Dark Knight what? I'll be honest, I sort of felt that The Dark Knight Rises would roll at number one through the month of August. This week's box office performance just proved that today's theater patron is all about what's new over let's go see that film again.

I know that The Dark Knight Rises has already had a ton of repeat viewings, but I think it has really run its course as it were and will only see its returns getting less and less.

Universal proved that audiences want more Bourne, with or without star Matt Damon. The latest incarnation The Bourne Legacy debuted to a rather nice $40.3 million. Now granted, The Bourne Ultimatum opened to nearly $70 million in Matt Damon swan's song from the series, but this number is still impressive given the competition and the last weekend of the Olympics.

The Campaign also opened admirably in second place. The Will Ferrell / Zach Galifianakis laugher pitted the two stars as political opponents vying for the same Congressional seat. The trailers and commercials looked promising, but you had to wonder if all of the funny moments were contained therein.

With a $27.4 million debut, I think it's safe to say that not all of the precincts are in, but it's looking like a landslide victory for comedy.

Also opening this past weekend was a story about a couple whose past romantic spark has alluded them recently. Hope Springs is exactly the type of adult counter-programing that has worked in the past against the younger skewing fare. It opened mid-week and turned in a respectable $20.1 million.

The Dark Knight Rises added another $19.5 million to its coffers raising its total to $390.1 million. Last week, I hedged my bet but still said that it had enough steam to reach the upper $400 million range, but now I think it might sputter around $450, which is still pretty spectacular.

You may have heard something about there being a new Jack Ryan flick over at Paramount. Well, after many years of being kicked around the studio lot, it seems that this project is moving forward.

Chris Pine has been attached to take up the Jack Ryan mantle for some time now in the reboot. Kenneth Branagh, fresh off his Olympics opening ceremonies stint as what can only be described as a British version of Abraham Lincoln, was tapped to direct the film and he wisely named himself as the actor who will be playing the main baddie.

So, that only left one major question as to who would be playing Jack's love interest and eventual wife Dr. Carolyn "Cathy" Ryan. News over the weekend broke that Keira Knightley had won the role.

Now, I'm not saying that this is necessarily a bad choice, but it is definitely an interesting one. Keira proved her action chops in the Pirates of the Caribbean films, but she's been more partial to bustiers than bullets over the years.

Regardless, the Jack Ryan character is one that is ripe for being rebooted. Although personally, I would have simply optioned the Jack Ryan, Jr. series that incorporates all of Tom Clancy's major characters from his series of books, but primarily focuses on Jack Ryan's son's indoctrination into special ops.

How's that for six degrees of Jack Ryan?

If you're a big '80s action film junkie, then we have the still just for you. But be warned, your heroes Arnold Schwarzenegger and Sylvester Stallone haven't exactly aged well. 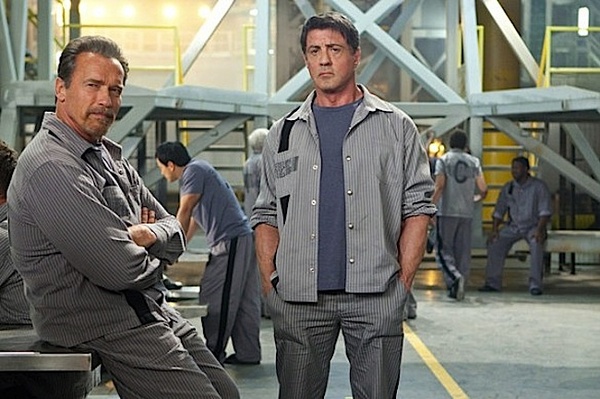 What you are seeing above is the first official still from the upcoming film The Tomb. While sure, Arnold and Sly got together for bits and pieces in the Expendables films, this is their first co-starring gig together.

As you can see, it seems that the pair of aging action stars might need a bit of Just For Men to get their locks looking the part. And what's up with Arnold's nasty goatee?

Oh well, it seems that the geriatric duo will make action movies until they find themselves in connecting rooms at the Hollywood Hills Retirement Home. Hey, now that sounds like a good idea for a movie.

I think I will leave it there for now. I know that some of you are probably wondering why we haven't touched on the new trailer for Red Dawn yet and the truth is that we are dedicating a "Double Wide Trailers" post to it.

It should debut this afternoon, until then mix well my friends.