Review: 'Force of Nature' will rock you like a hurricane 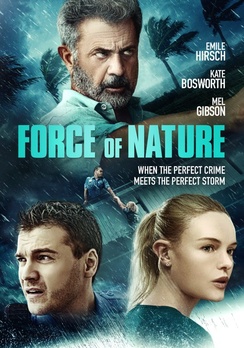 With all due apologies to the German rock band, the only thing missing from Force of Nature was an action montage set to Scorpion's most revered song in their catalog. Heck, even using it for the trailer would have been enough to help its long odds.

But alas, it is a wasted opportunity. Sort of like top-billed actor Mel Gibson's career.

What is the current barometer on Mel Gibson? Ever since his bizarre alcohol-fueled issues in the mid-to-late 2000s and bizarre comments, his stock has been up and down. Once thought to be Hollywood's most bankable star, he hasn't had an acting hit since when? 2002's Signs?

Gibson's odd behavior certainly made him a pariah in Hollywood for about a decade, but he slowly started his comeback culminating in praise for his directorial work on the Oscar-nominated Hacksaw Ridge. Despite his slow climb to relevancy in Tinsel Town, his acting career has never fully rebounded and that point has never been driven home more than in his latest offering Force of Nature.

Replacing Bruce Willis, who pulled out of the film, Mel plays a retired cop who refuses to evacuate his apartment during a category five hurricane and unwittingly becomes mixed up in a bold heist. After a gang of thieves break into the apartment complex, the curmudgeonly Mel and an odd assortment of characters must band together to survive both the natural disaster and the psychotic gang leader who is hellbent on getting his big payday no matter what the cost.

On its surface, Force of Nature was probably a very easy sell to the studio and the actors. It's basically Die Hard set during a hurricane. Anyone who has seen the ridiculous success of the Sharknado movies must have been drooling over the potential profits.

Of course, a lot has to break the right way for things to go from concept to bags full of cash and it's pretty apparent early on that there's a pretty good reason for this film to be dumped in the middle of a pandemic-induced wasteland of entertainment options. That said, there is still enough of that initial concept around to keep you entertained for a solid 90 minutes if you lower your expectations considerably.

Joining Mel Gibson on this ride are Emile Hirsch and Kate Bosworth, who both also haven't had a significant hit for the last 15 years. In many ways, there's a bit of curiosity factor involved simply to see what happened to these three actors and to discern if they still have it. For the most part, they do, but the script doesn't really do them too many favors.

There's an old adage, "Keep It Simple, Stupid." Had the filmmakers simply followed these wise words, then the result would have been infinitely more enjoyable. That's the real brilliance of the original Die Hard film, the plot was so simple that it worked. By contrast, Force of Nature included Nazi war criminals, stolen art, a hungry tiger, a complicated heist that is never fully explained and at least one ridiculous romantic angle.

When half of the "good guys" are police, it's hard to watch the film now without bringing in some of the current explosive political landscape. That's really no fault of the filmmakers, but the cops are mostly caricatures of film cops from other, better films. Heck, Emile Hirsch's cop character even starts the film with a gun in his mouth much like Gibson's Riggs from Lethal Weapon.

Of course, the filmmakers did unwittingly address the current backlash against cops with Checkhov's Tiger. An African-American character has trained his vicious "pet" to attack cops after having his own racial profiling run-in with the police and as the action unfolds, you know that it's just a matter of time before Checkhov's Tiger gets his pound of flesh.

All of that being said, there are many strong action elements in the film and the tension of the raging hurricane heightens the story. In fact, the use of the storm's eye is great and they capitalize on it in a way that I don't think any other film has done before. During the best times, Force of Nature reminded me a lot of Hard Rain and that's always a good thing.

Unfortunately, the film is a bit uneven and your mileage will most certainly vary. And yet, the decision to release Force of Nature now may actually be the best thing to happen to it. Let's face it, there aren't many films coming out right now, so our option are limited. You can do a lot worse, but if you come in with the right mindset, I think you will enjoy the experience.

Force of Nature is now available on Blu-ray and DVD.