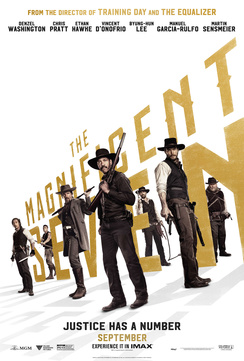 Just when it looked like the box office might be cooling down, a new record is set. And no, Ghostbusters wasn't the film to set the title, but that film did just fine. With the weather starting to look more like late Summer and temperatures rising, it seems logical that more people will seek refuge in the air-conditioned viewing rooms of their local megaplexes.

There's no question that August is going to be dominated by Suicide Squad, but recent trends were indicating that Suicide Squad would have to be the great last gasp to rescue a sagging box office. Now, with all of the animated films holding strong and Ghostbusters adding to the family-friendly fare at the box, there's a real chance that the box office can save itself before Suicide Squad even opens up next month.

The keys will be upcoming films Star Trek Beyond, Jason Bourne and Bad Moms. The first two have built in audiences and have been trending in the right direction the last few weeks, while Bad Moms could quite possibly do for under-appreciated moms what The Hangover did for lonely bros.

Of course, there's still a long way to go to right the Summer ship. Does Suicide Squad have enough juice in it to right the ship that is trending about 5% less than last year? The good news is that it might have to do it all alone now. But that speculation is putting the cart before the proverbial horse. Why don't we check in on the business from this past weekend?

If there were any lingering questions concerning The Secret Life of Pets or Illumination Entertainment, I do believe that this weekend's strong showing for another first place finish officially squelches them. Pets earned another $50 million this weekend and more importantly held off Ghostbusters for the top slot.

The film has now grossed over $200 million and is well on its way to surpass the $300 million mark. The only real question left is whether it had enough business left in it to reach the top 10 animated films of all time list. It will need surpass fellow Illumination Entertainment film Minions and its total of $336 million.

Last week, I was convinced it would enter the top 10 easily, but this week, I'm not so sure. Not only was its opening quite a bit less than Finding Dory, but its 51% drop in the second weekend was also a bit larger than Finding Dory's drop. I still think it will easily break $300 million, but it will struggle to break into the top 10.

Do you want to know just how different today's box office landscape is from, say, the mid 1980s? You only have to look as far as this week's second-highest grossing film Ghostbusters. By all accounts, its $46 million opening is a home run. It is more than the opening weekends of the first two Ghostbusters films combined, and yet, there is little to no chance that the latest incarnation will surpass the total box office of the original film.

The original Ghostbusters opened on June 8, 1984 and it was still earning in excess of a million dollars at the box office well into November. That type of longevity is unheard of in today's "get in, get paid, get out" box office methodology. Studios are basically exchanging a longer, more lucrative release strategy for one that places all of the importance on that first weekend.

That being said, the latest Ghostbusters is considered a success and should prove to be one of Sony's biggest hits at the box office this year. Despite the near-constant negative backlash from the bro demographic, the film has enjoyed mostly positive reviews and I can speak knowledgeably on the subject since I went out to see it this weekend, its an enjoyable Summer movie. I plan to have a more in-depth writeup on the site later today, so be sure to check back.

The only other newcomer this week to crack the top 15 this weekend was the Bryan Cranston film The Infiltrator. The film is based on the true story of a federal agent who goes undercover to infiltrate Pablo Escobar's drug network. While it might have only earned $5 million this weekend, that is considered to be quite a victory for this smaller release.

As for that record that I alluded to earlier, yet another notch in the old belt for Disney. Finding Dory raised its domestic total to $445 million, officially becoming the highest-grossing animated film of all time.