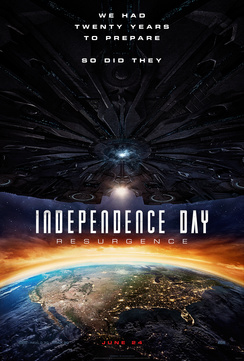 Jeff Goldblum's character David Levinson has the best line in the new trailer for Independence Day Resurgence. "They like to get the landmarks."

The iconic shot from the first Independence Day involved the aliens blowing up the White House and it would appear from this trailer that they are planning to pick up where they left off 20 years ago. Which brings up an interesting question, can you really go back to the well 20 years later and revive a movie franchise?

Recently, we have seen efforts like My Big Fat Greek Wedding 2 and Zoolander 2 fall on mostly deaf ears. And yet, studios continue to look for ways to "go back to the old well." Of course, sometimes it works out for the studio, just ask Disney about their successful reboot of the Star Wars franchise.

Fox is desperate to reboot their hits. So much so, that they still believe James Cameron and his Don Quixotian quest to bring more Avatar films to the big screen. So, it's not surprising that they are touting Independence Day Resurgence, which will be released almost exactly 20 years after the original film.

Will audiences reconnect with the alien invasion story? Do audiences even remember the film? One guy that I work with admitted that he's never seen the original film and he's in his late 30s. Personally, I was blown away by the original film and Independence Day Resurgence has been on my must-see list for this summer for a long time.