'Masterminds' trailer is funny, based on a true story 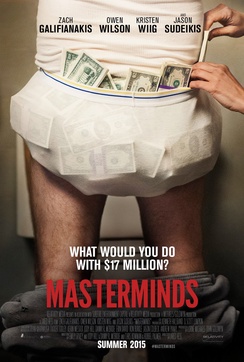 You had me at Zach Galifianakis stuffing a ton of money in his tighty whities, but when you throw in Kristen Wiig and Owen Wilson it's a no-brainer. Masterminds is going to be one heck of a hilarious film.

Based on the true story of the 1997 Loomis Fargo armored car robbery in North Carolina that netted a haul of over $17 million, you have to wonder just how loose of an interpretation is found in Masterminds. Don't get me wrong, I love me some Galifianakis, but if his real-life counterpart is as bumbling as he is in the trailer, you have to wonder how he was able to even get the money out of the building.

My guess is that it's a very loose interpretation and that suits me just fine. The above actors and a hilarious turn from Jason Sudeikis as a contract killer thrive in a loose environment and it appears this one is going to be the comedy hit not to be missed this August. Masterminds opens on August 14 and if you like funny con artist films ala Dirty Rotten Scoundrels or Identity Thief, then you'll want to make sure and put this one on your calendar.