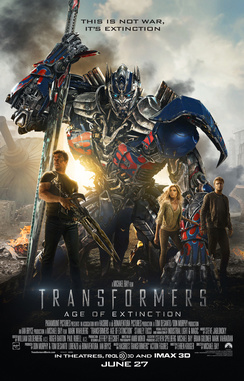 Look, we bash Michael Bay around here - a lot, but we do have respect for his ability to make a ton of money at the box office. It's a double-edged sword though as his effects-heavy action films also tend to cost more than other tradition al films.

Like him or loathe him, Michael Bay never pretends to be anything other than what he truly is and that is a director that can churn out heart-pounding action flicks like none other. I have to give him credit. He knows what he is and doesn't do anything fancy or inconsistent with his winning formula.

Now, that doesn't mean that his flicks are for everyone, but I think this weekend is just another indication that they are for a great majority of people. But this America and on this holiday week where we celebrate the freedom that makes us citizens of this great country, it's that freedom of choice that allows us to vote with our pocketbook.

As is often the case, the weekend before the holiday is more the calm before the storm, so this writeup will probably be short. But don't worry, we'll be back next Monday with plenty to talk about as Hollywood's finest set out to prove that they are a true American hero.

For now, sit back and enjoy the MMMM.

As predicted right here in this column last week, Transformers: Age of Extinction broke the $100 million barrier. OK, so it barely broke it by hitting the number right on the dot, but it still made me feel all warm and fuzzy all over.

The $100 million debut was the second highest Transformers opening behind 2009's Transformers: Revenge of the Fallen, which brought in $109 million in its first weekend. Of course, all three previous Transformers movies opened up on Wednesday en route to each of them surpassing $300 million.

When it comes to the long-term prospects of Transformers: Age of Extinction, I have my doubts that it will reach the rarified air of its predecessors, but it will get close. The real wild card is the upcoming 4th of July holiday and the U.S. soccer team's performance on the pitch at the World Cup. If the team survives tomorrow's knockout stage game against Belgium, they will play a primetime game Saturday night against perennial favorite Argentina.

If this were to come to fruition, this would easily become the most watched soccer match in U.S. history. Such a distraction from the movie theater could have a significant hit across the board, limiting the earning power of the traditionally lucrative holiday weekend. All of that being said, I think the franchise, while still powerful, is losing its legs as it gets older (don't we all?) and the drop-off will be significant enough to result in a total box office around $275 million or so.

Yeah, that's all that I have time for this week, but I met my goal and it's still Monday morning - barely. Enjoy your short week and remember Mix Well.