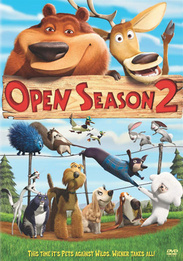 Boog (Mike Epps) and Elliot (Joel McHale) are back for more crazy adventures! After falling head over hooves in love with Giselle (Jane Krakowski), Elliot's road to the altar takes a slight detour when Mr. Weenie (Cody Cameron) is kidnapped by a group of pampered pets determined to return him to his owners.

Boog, Elliot, McSquizzy (Billy Connelly), Buddy and the rest of the woodland creatures launch a full-scale rescue mission for their sausage-shaped friend and soon find themselves in enemy camp: the world of the pets. Led by a toy poodle named Fifi (Crispin Glover), the pets do not plan to let Mr. Weenie go without a fight.