Alvin and the Chipmunks 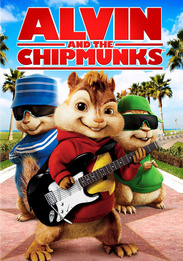 Struggling songwriter Dave Seville (Jason Lee) opens his home to a talented trio of chipmunks named Alvin, Simon and Theodore, they quickly become overnight music sensations. But when a greedy record producer (David Cross) tries to exploit the musical ensemble, Dave must use a little human ingenuityâand a lot of âmunk mischiefâto get his furry family back before itâs too late!