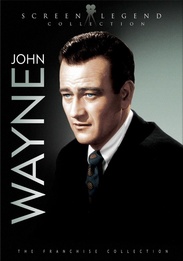 John Wayne is one of the most popular and recognizable leading men ever to hit the silver screen. Five memorable films capture his unforgettable career in the John Wayne: Screen Legend Collection. Co-starring an impressive roster of talent including Katharine Hepburn, Kirk Douglas, Marlene Dietrich and Randolph Scott, these films highlight an American icon who will always be remembered as a true screen legend.Reap the Wild WindCecil B. DeMille directs John Wayne and Ray Milland as two sailors battling pirates and competing for the affections of a southern belle (Paulette Goddard) in 1840s Key West.The SpoilersJohn Wayne joins Marlene Dietrich and Randolph Scott in an all-star adventure classic about gold and greed in an Alaskan boomtown during the 1890s.The War WagonA rancher (John Wayne) recruits a brash gunslinger (Kirk Douglas) along with a raucous crew of misfits and readies them to pull off one of the most impossible heists of all time. HellfightersA Texan demolition specialist (John Wayne) battles a perilous oil-well fire and hopes to reunite with his daughter and the wife who left him 20 years ago.Rooster CogburnThe saga of True Grit continues as John Wayne reprises his role as a Deputy Marshall who helps a missionary (Katharine Hepburn) bring justice to the Wild West.