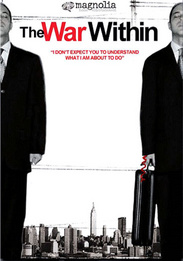 Written and directed by first time filmmaker Joseph Castelo, The War Within is the story of Hassan, (Ayad Akhtar in his debut performance), a Pakistani engineering student in Paris who is mistakenly apprehended for terrorist activities and forcibly interrogated by U.S. intelligence services.

So shaken by the experience, he vows revenge and joins a terrorist cell based in New York City with plans to begin the ground war in the United States. On the morning the attack is due to take place, all members of the cell are arrested except Hassan and one other member. With no alternative and nowhere else to turn, Hassan must rely on the hospitality of his former best friend Sayeed, who is living the American dream with his family in New Jersey.

Lying to his friend about why he is in the US, Sayeed helps Hassan get a job driving a livery cab which furnishes Hassan with the money he needs to start manufacturing explosives in the hope of achieving a smaller but still effective act of terror.

With each day that passes, we witness Hassan