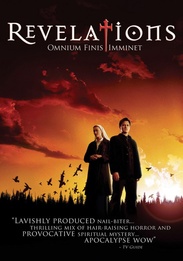 The time of miracles is once again at hand in the gripping drama series, Revelations. Bill Pullman (Independence Day) stars a Harvard professor Dr. Richard Massey, an astrophysicist who's certain that all worldly events can be explained by science.

He is challenged by Sister Josepha Montafiore (Natascha McElhone, Solaris), a devout nun who leads him on a journey through the unfamiliar world of faith. Drawn together by personal tragedy, these unlikely partners are propelled into a deepening mystery when they discover evidence that the world, as predicted by The Book of Revelation, has reached The End of Days.

Join the battle for the fate of mankind in the electrifying phenomenon that The New York Times proclaims, "Well-made, spooky and suspenseful."