That's So Raven: Disguise the Limit 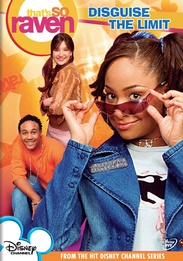 Join Raven on more hilarious adventures of psychic proportions as she covers up and laughs it up in a variety of disguises, impersonations, and way cool fun. Raven plasters herself in clay and feathers to play "statue" when she accidentally breaks the statue that Chelsea made of her for an art contest. Then, Raven turns a family feud into family fun when she pays a visit to her country cousins. Look out for Raven as she plays the characters Auntie Faye, Delroy, and Baby G. And, in a never-before-seen episode, Raven cooks up a scheme to serve up some hot tunes at the Chill Grill when she has a vision that it's going out of business.