An American Werewolf In Paris 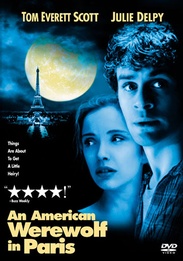 The daughter of the werewolf from An American Werewolf in London isalive and living in Paris where her mother and stepfather are trying toovercome her lycanthropic disease. A trio of American tourists on athrill-seeking trip around Europe manage to stop her from plunging toher death from the top of the Eiffel Tower and are embroiled in ahorrific but often hilarious plot involving a secret society ofwerewolves based in the city and a drug which allows them to change atany time. This time there's no need for a full moon.

Rated R for werewolf/violence and gore, and for some sexuality/nudity.