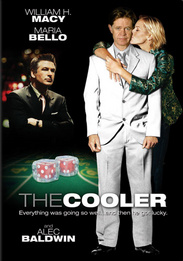 An unlucky man is hired by the last mob-run casino in Las Vegas to help them counter the winning streaks of gamblers. The unlucky man's bad luck is contagious and the casino eases the bleeding.

The plan is going well, until the unlucky man falls in love with a cocktail waitress and his luck takes a turn for the good. Now, the crooked casino boss has to break up the new romance to save his job and the casino.

Rated R for strong sexuality, violence, language and some drug use.