House Of The Dead 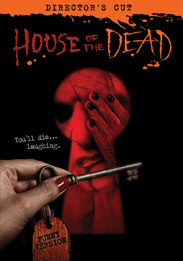 Based on the best selling video game from Sega, House of the Dead tells the story of a group of college students who go to a rave on a mysterious island and get more than they bargained for when they find themselves stalked by killer zombies and terrifying creatures intent on feasting on the flesh of the living. With only a few weapons and time running out, they take shelter in an ancient house, inside which they will uncover the secrets of the house.

Rated R for pervasive strong violence/gore, language and some nudity.