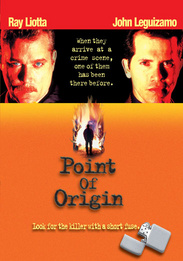 Based on a terrifying true story, there's a madman setting fires that kill in Southern California. A madman leading a double-life that his friends, his partner, even his wife doesn't know about. John Orr (Liotta) is a veteran investigator with a sixth sense of placing the origin of suspect fires. His partner, Keith Lang (Leguizamo), has taken all he's learned from Orr to join a task force in search of the killer. If the knowledge it takes to commit the crime is the knowledge it takes to solve it, then one of these two men is tracking the other. Time is running out as the number of victims rises. Now the only way to stop the killer is to find the Point of Origin.