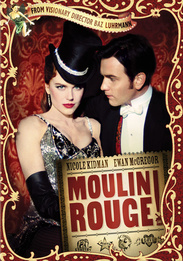 The story follows a poet (McGregor) who defies his father by moving toMonmarte, France, the 19th century equivalent of Andy Warhol's Factory.He falls into the world of Toulouse-Lautrec (Leguizamo) and hisentourage, and is drafted to write a nightclub spectacular. In this seedworld of sex, drugs and electricity, he begins a passionate butultimately doomed love affair with the club's highest paid star andcourtesan (Kidman).