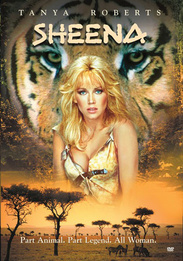 Journey to deepest, darkest Africa for thrills, romance and high adventure! Starring Tanya Roberts, SHEENA brings to life the legendary queen of the jungle in a spectacular epic shot entirely in Kenya. Orphaned in Zambouli territory, the blonde Sheena (Roberts) is raised by a noble tribe and taught to communicate telepathically with all creatures. She gets a firsthand lesson in love from Vic Casey (Ted Wass), a wisecracking TV journalist. In Africa for a story on a royal football player, Prince Otwani (Trevor Thomas), Vic soon finds himself embroiled in a web of political intrigue. And when the evil prince decides to invade the Zamboulis' land, it is up to Sheena to rescue Vic and save her idyllic kingdom!