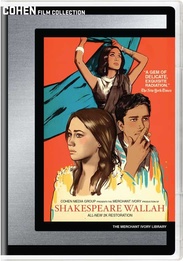 One of the first Merchant-Ivory productions, Shakespeare Wallah establishes the tone for so many of their collaborations to come: the deft, multi-layered screenplay by Ruth Prawer Jhabvala, luminous cinematography, a wry sense of humor, and a cast of characters rich in their very human complexity. The true story of Geoffrey Kendal and his family of traveling theatrical players is used as a fascinating lens into the ever-evolving colonial relationship between Great Britain and India. With music by the legendary Satyajit Ray and a memorable performance by Madhur Jaffrey (which earned her the Silver Bear award for Best Actress at the 15th Berlin International Film Festival).