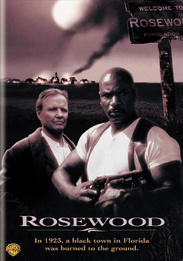 Racial tensions still exist sixty years after the civil war, but the black town of Rosewood and its white sister town of Sumner peacefully coexist. White shopkeeper John Wright has made a living serving the black clientele in Rosewood, including Sylvester Carrier and his family. When a wealthy, but mysterious horse riding stranger Mann arrives in town, his appearance unfortunately coincides with the news of a convict on the loose. A young wife, Fannie Taylor, who's involved in an abusive adulterous affair, takes advantage of the situation and blames her beatings on an anonymous black man. Soon the white men of Sumner, including Duke, form into a lynching mob, and it's all Sheriff Walker can do to stop them. As the mob mentality increases, Mann helps the citizens of Rosewood as their town is attacked.