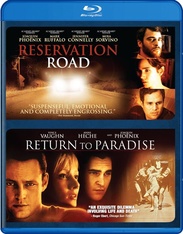 RESERVATION ROAD
A powerful human story of anger, revenge and great courage, this film takes you on an intense journey that follows two fathers as their families and lives converge after the events of one fateful night.

RETURN TO PARADISE
Lewis (Joaquin Phoenix), Sheriff (Vince Vaughn) and Tony (David Conrad) are three friends vacationing in Malaysia. Sheriff and Tony eventually leave to pursue careers in New York, but Lewis stays behind to work with orangutans. Two years later, Sheriff and Tony learn that, because of their past actions, Lewis has been arrested for drug possession. With Lewis facing a death sentence, the friends are left with a difficult decision: return to Malaysia and split Lewis' sentence, or let him die.