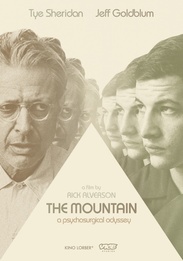 The Mountain is a surreal and unsettling tour of 1950s America starring Tye Sheridan (Ready Player One) and Jeff Goldblum (Jurassic Park). Since his motherâs confinement to an institution, Andy (Sheridan) has lived in the shadow of his stoic father. A family acquaintance, Dr. Wallace Fiennes (Goldblum), employs the introverted young man as a photographer to document an asylum tour advocating for his increasingly controversial lobotomy procedure. As the tour progresses and Andy witnesses the doctorâs career and life unravel, he begins to identify with the institutionsâ patients. Arriving at a California mountain town, a growing center of the New Age movement, they encounter an unconventional French healer (Denis Lavant, The Lovers on the Bridge) who requests a lobotomy for his own daughter, Susan (Hannah Gross, Mindhunter).