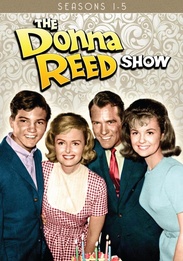 Join the Family Fun With One of the Most Beloved TV Sitcoms of All Time. Originally airing on ABC-TV from 1958 to 1966, THE DONNA REED SHOW became one of the most popular and enduring family situation comedy series in television history.

Starring Academy Award-winning actress DONNA REED (From Here To Eternity, Itâs A Wonderful Life) as homemaker Donna Stone, CARL BETZ as her pediatric husband Alex, SHELLEY FABARES as daughter Mary, Paul Petersen as son Jeff and, later, Patty Petersen as adoptee Trisha, THE DONNA REED SHOW is a humorous and heartwarming slice of Americana that has earned a legion of new fans through reruns on Nick At Nite, TV Land and MeTV.

This special collection presents all 186 episodes from Seasons 1 through 5 in complete versions and digitally remastered along with hours of special features.