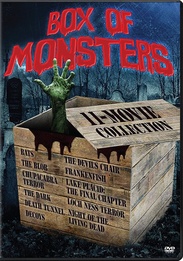 From deep uncharted waters and through cavernous subterranean tunnels emerges into Lake Superior an unknown and menacing species. The gruesome bloodshed to follow doesn't stop at Nessie; she's brought her vicious offspring to help terrorize the innocent townspeople living around the lake. No man on land or water has a chance against this forty-foot bloodthirsty reptile and her spawn? No man except the only one who has ever survived Nessie's wrath. Driven by a deep-seated vengeance, James Murphy (Brian Krause, TV's "Charmed") hunts down this terrible species with skillful force. Will Murphy save the locals of Lake Superior or end up as one of Nessie's countless casualties? Also starring Don S. Davis (TV's "Stargate: SG-1")