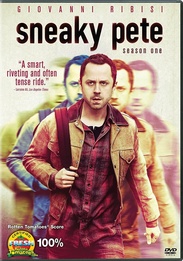 From Executive Producers David Shore and Bryan Cranston, Sneaky Pete revolves around a con-man (Giovanni Ribisi) who, after leaving prison, takes cover from his past by assuming the identity of his cellmate, Pete. He moves in with Peteâs unsuspecting family and is roped into the familyâs bail bond business. In order to keep the charade up, he plays the part of a skip tracer, taking down criminals worse than himselfâand discovering a family life heâs never had.