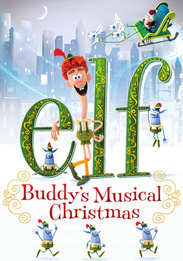 Based on the Broadway musical based on the hit Christmas movie, Elf tells the story of Buddy the elf and his quest to reunite with the human father he never knew existed. While Buddy's sincerity and idealism are commonplace at the North Pole, these attributes are rejected in cynical New York City. But through song, dance, and relentless good cheer, Buddy rekindles the spirit of Christmas for the entire city.