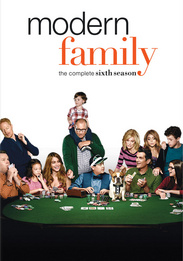 The honeymoon is over, but the laughs continue in Season Six of Modern Family, winner of five consecutive EmmyÂ® Awards for Outstanding Comedy Series. As freshly hitched Cam and Mitch acclimate to the realities of wedded bliss, Phil and Claire find their marriage stressed by annoying neighbors, Thanksgiving dinner gone awry and Claireâs online snooping. Meanwhile, a spy-camera drone wreaks havoc in Jay and Gloriaâs backyard and a close call on the highway leads to amusing changes in various members of the Pritchett-Dunphy clan. It all adds up to the funniest season yet of this brilliant and acclaimed comedy.