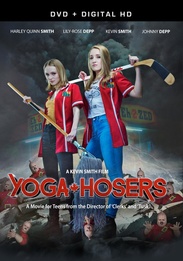 15-year-olds Colleen Collette and Colleen McKenzie (Harley Quinn Smith and Lily-Rose Depp) are on their smartphones constantly, sing in a small band, and take yoga classes. The girls will do just about anything to receive an invitation to a senior party. But when they discover the leader of a Nazi splinter group has been raising an army of monsters beneath the store where they work, the teens team up with a legendary man-hunter (Johnny Depp) to stop the world-threatening uprising.