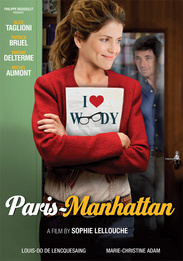 Alice is a Parisian pharmacist who has a fixation on Woody Allen and his films. She has a huge portrait of him hanging in her bedroom, with which she tends to converse, seeking his wise counsel about life. She even hands out DVDs of his films to her customers as medicine for their ailments. Her parents have a sense of urgency for her to find a man, but none can match Woody Allen, not even the alarm specialist Victor who services the pharmacy. But there is one thing a man could do to impress her - introduce her to Woody Allen.