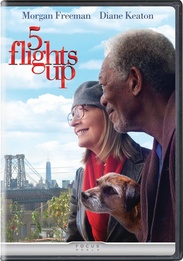 "5 Flights Up" tells the story of one eventful weekend in the life of Ruth (Keaton) and Alex (Freeman), an aging New York couple who have finally decided to sell their East Village apartment of 40 years. They fear that they are getting too old to climb the stairs, and Ruth's realtor niece has convinced them that they can make a small fortune on the sale. Alex, an artist, and Ruth, a former schoolteacher, are enticed by the prospect of suddenly having more money than they ever dreamt possible. But as they prepare for the open house, the couple's beloved little dog gets sick and has to be taken to an animal hospital, and New York City suddenly goes on high alert when a truck gets stuck in the Midtown tunnel and the driver flees the scene. Over the course of one hectic weekend, Ruth and Alex are swept along as every shift in the breaking tanker story makes the real estate market spike and trough. As the bids fly, Ruth and Alex reflect upon on all the memories that they have shared in their home during the course of 40 happy and fulfilling years together, and they realize that sometimes happiness can't be measured as easily as square footage or asking prices.

Rated PG-13 for language and some nude images.