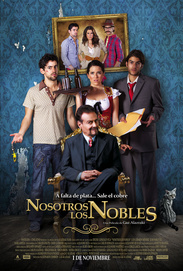 When successful construction mogul Herman Noble accidentally stumbles onto his childrens credit card statements, he discovers they are spending money beyond control. His oldest son Javier, neglects the family business in exchange of his own ridiculous business ideas. His daughter Barbara gets engaged to a 40 year-old gigolo just to spike her father, Herman, and his youngest son Charlie was expelled from college after having sex with the teacher. Herman realizes his children are spoiled beyond redemption and decides to teach them a lesson, before its too late.

He stages a massive foreclosure and sneaks them out of the luxurious house into a poor neighborhood. He makes them find work. His hippie son Charlie, gets work as a bank teller, Javi drives a cheap transit bus, and Barbara becomes a waitress at a cantina.

Herman enjoys his childrens suffering as they learn the hardships of working in the real world, but everything changes once he learns that Barbara has been a bulimic for 8 years and that Javier is dyslexic, it is clear to him that his absence has been deeper that he imagined. It is only when all the secrets com out that the family begins to come together.

Unfortunately, Peter, the 40 year old gigolo dating Barbara, discovers that Hermans bankruptcy was staged. So he shows up at the poor house and corners Herman when he threatens to expose the truth. Peter takes them all back to their home, leaving Herman at the hardest juncture: If he tells his children the truth, they will never forgive him. But if he remains quiet, his daughter will marry a blackmailer... What can he do?