Star Trek The Next Generation: Unification 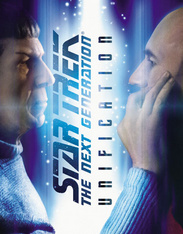 The epic two-part story seamlessly unified into one feature length presentation! Leonard Nimoy reprises his iconic role as Spock and joins the crew of the EnterpriseÂ® in this fan-favorite double episode! When the Federation calls for help in locating an ambassador suspected of defecting, Picard is troubled to learn that Spock is the one who has vanished. Seeking information from Spockâs ailing father, Sarek, and unlikely help from the Klingons, Picard and his crew find the ambassador pursuing a personal mission on Romulus: a Vulcan/Romulan reunification. But though the Romulans claim to support the same goal, their motives are not what they seem.