Errors of the Human Body 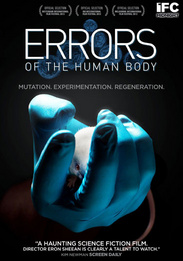 Following divorce from his wife and the loss of his son to a rare genetic mutation, Canadian geneticist Geoff Burton relocates to the harsh, wintry scenery of Dresden, Germany to work on groundbreaking new project that might just be his key to redemption. When teamed up with his former intern and colleague Rebekka, he starts working on a human regenerative gene with direct ties to his personal tragedy, yet matters prove increasingly difficult: jealous co--âworkers' feelings are ruffled, old flames are rekindled and personal demons become consistently harder to suppress in this new and oppressive work environment. Still haunted by the memory of his wife and his failures to have saved his deceased son, Burton finds himself maddeningly close to a medical breakthrough, yet quickly spiralling out of control. Collapsing his career and personal life into a dark and increasingly dangerous tunnel--âvision of competitive genetics, delusions of all kinds and the terrifying potential of massive discoveries gone awry, Burton is quite literally the stranger in the strange land. The question remains: how far will Burton be willing to go to atone for the errors of his past?