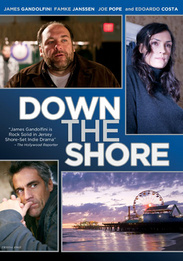 In what critics are calling his most powerful lead role since âThe Sopranos," Golden GlobeÂ® winner James Gandolfini stars as Bailey, the owner/operator of a rundown kiddie amusement park on the wintry Jersey shore. But when a mysterious French stranger appears carrying the ashes of Baileyâs younger sister and claiming to be her husband, dark secrets begin to be unearthed. Now with the help of his childhood best friend and former lover (Famke Janssen of TAKEN and TAKEN 2), Bailey must confront his own deadly past and desperate future. Edoardo Costa (LIVE FREE OR DIE HARD) co-stars in this haunting drama about shattered dreams, shocking crimes and final chances that live DOWN THE SHORE.

Rated R for language and some drug use.