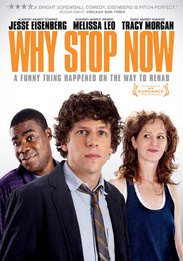 WHY STOP NOW brings together the comic talents of Academy Award-nominee Jesse Eisenberg, Academy Award-winner Melissa Leo and Tracy Morgan in the summer's wildest comedy. Eli (Eisenberg) is a piano prodigy. Today is the audition that will determine his future-- will he launch a career and take off into the world? Or will he stay stuck, caring for his sister and mother (Leo) who, despite her cheerful, loving disposition, is a drug addict. The only obstacle to a seamless transition into his future is dropping off Mom off at the center where she will enter rehab, but a glitch in the system forces sends them off to enlist the help of an unlikely ally, her drug dealer Sprinkles (Morgan). The day spirals downhill quickly, and the hapless team must collaborate every step of the way to battle their own demons and get Eli out of the rabbit hole.