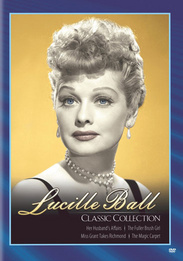 Celebrate the centennial of America's favorite comedienneâred-headed or otherwiseâwith this fabulous four-pack of Lucille Ball's Columbia features, all made at the peak of her screen career. In Her Husband's Affairs, written by the legendary Ben Hecht and Charles Lederer, she'sâwhat else?âa meddling wife, this time to a scientist (Franchot Tone)âbut in this case she's the one who always saves him! In Miss Grant Takes Richmond, she's a befuddled secretary who unknowingly throws a monkey wrench into a bookie's (William Holden) latest scheme. In The Fuller Brush Girl, written by the incomparable Frank Tashlin, she's a goofy door-to-door saleswoman who becomes the prime suspect when acustomer is murdered and takes it on the lam with her fiancÃ© (Eddie Albert). And in Sam Katzman's Arabian Nights fantasy The Magic Carpet, she shifts gears to play a villainess alongside none other than Raymond Burr (John Agar and Patricia Medina are stuck with the good-guy roles). It's a collection you simply must haveâespecially when Ricky brings some big-shot home from the club! Newly remastered.