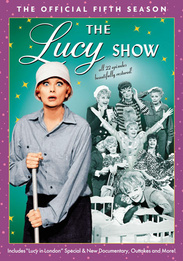 The Lucy Show was Ms. Ball's follow-up series to her classic I Love Lucy and subsequent Lucy-Desi Comedy Hour series of specials. To insure its success, she brought along many crew members from her previous series, including the writing staff. During the course of its run, the show underwent several format changes. Initially, the series was set in small town Danfield, New York. Lucy Carmichael was a widow with two children, Chris and Jerry, who shared a house with her buddy Vivian Bagley (Vivian Vance) and her son Sherman. In the first handful of shows, neighbor and occasional boyfriend Harry Conners (Dick Martin) was featured. Many of the plots during the show's first few seasons revolved around parenting and Lucy and Viv's involvement in the community. But Lucy was still Lucy, meaning trouble for anyone who became involved in her ingenious schemes. Holding the keys to her trust fund was tightwad banker Mr. Barnsdahl (Charles Lane) who endured Lucy's numerous attempts to get at more of her money.