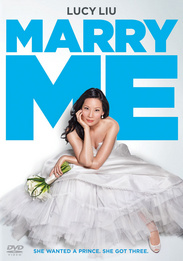 Rae Ann Carter (Lucy Liu, Charlieâs Angels) always wanted the fairytale where she meets a prince, falls in love and gets married, but feared that dream would never come true. Suddenly, Rae goes from having no man in her life to having three âcharming Luke (Steven Pasquale, TVâs Rescue Me), passionate Adam (Bobby Cannavale, The Station Agent), and sophisticated Harry (Enrique Murciano, TVâs Without a Trace) â all in love with Rae and asking to marry her. Which man will she choose? Featuring Annie Potts (TVâs Designing Women), MARRY ME is a romantic movie event that will sweep you off of your feet!